Surgery to reshape the nose is a very common plastic surgery procedure and it can both increase or decrease the size of nose. The shape of the tip, the bridge and also the nostrils can be changed as can the angle between the nose and the upper lip. Sometimes breathing difficulties can be corrected at the same time.

The nose is the central feature of the face, many people are self-conscious of shape which they may regard as too big, too small or have some other feature which they dislike. The characteristics of the nose are inherited from parents and develop during adolescent years. It continues until the age of 16, when the nose stops growing. It is, therefore, unwise to operate before this age.

What can be done?

An operation called Reduction Rhinoplasty reduces the size of the framework of the nose over which the skin is draped. The skin itself is not touched. The frame of the nose which is made up of bone in its upper half and gristle (cartilage) in its lower half is approached from underneath the skin through cuts which are made inside the nostrils. Think of the frame of the nose as being like the roof of a house. In order to straighten the nose and bring its bridge closer to the face, its “ridge” is cut away. Then, to restore a new ”ridge” or bridge-line, the two sides of the nose are bought together by cutting the bones of the nose where they join onto the cheek bones. The elasticity of the overlying skin allows it to shrink down on the smaller frame. 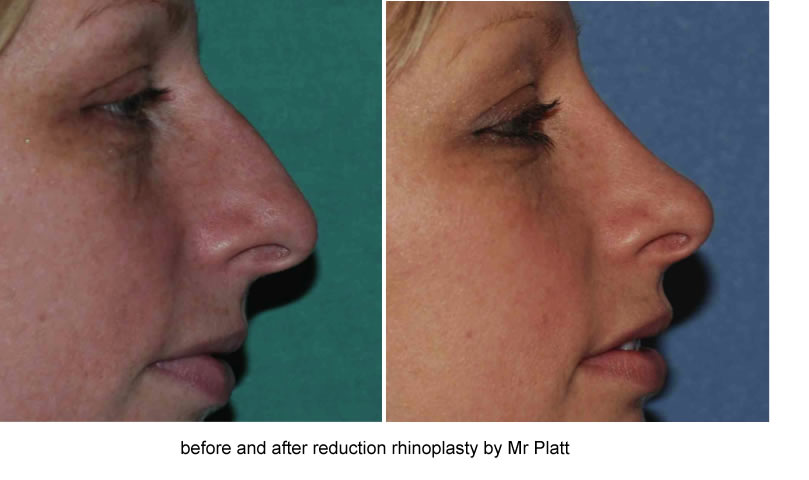 This operation effectively narrows the width of the nose. If doing so makes the nostrils seem too wide, it may be necessary to narrow them as well by cutting out a small piece of skin in the floor of the nostril which would leave a fine scar on each side. It is also possible to shorten the nose and to slim down a bulky tip by reducing the amount of cartilage which shapes the end of the the nose. If you have some difficulty breathing through your nose, it may be possible to improve this at the same time by adjusting the lie of the plate of the bone which separates one half of your nose from the other. This is referred to as a Septoplasty. Sometimes the size of the nose as a feature of the face is influenced by the proportions of the other features, such as the chin and the cheek bones, and to ”normalise” the appearance of the face it may be advisable to alter these features as well, either at the same time as the rhinoplasty, or during a separate operation.

What are the consequences?

There is always some bruising and swelling, particularly around the eyes, which can take up to three weeks to completely disappear and you would need to wear a firm splint over your nose during part of this time. By the end of three weeks, swelling will have settled sufficiently for you to look normal to others and as if you had not had recent surgery. Indeed, it is likely that you will be surprised by the absence of other people’s reactions to the fact that you have a new nose. They, of course, have not been self-conscious of your nose as you have been. If you have any anxieties about family and friends noticing a change in your appearance, change your hairstyle at the same time and they will think it is that which accounts for your new looks.

It is worth anticipating your own reaction to the first sight of yourself and your new nose. To start with, you will look rather strange in the mirror and not quite ‘you’ because of your different nose. Remember that it takes a few days for your mind’s eye to adjust itself to your new appearance and to recognise it as ‘you’. You should also bear in mind that it takes a good three months or more for all the swelling to settle out of the nose so, if there are any minor problems of shape soon after the operation, do not worry, they will almost certainly improve with time. Your nose will also feel rather numb and stiff for several months, particularly around the tip.

What are the limitations?

The object of the operation is to make your nose look right for your eyes so that you lose your self-consciousness of it. It is, therefore, most important that you are clear in your mind what it is that you dislike about the appearance of your nose and that you are able to explain this to your surgeon. He or she will then be able to tell you what is surgically possible and what is not. For instance, if the skin on the tip of your nose is thick and oily, it may not be possible to reduce its bulky appearance as much as you might like because, generally speaking, it is not possible to thin the skin without leaving scars.

If you are in middle age or if you have a very large nose, there may be a limit to the amount of reduction that can be achieved to the size of your nose within the limitations of the elasticity of your skin to shrink down on the smaller frame.

If your nose is bent from previous injury, it may not be possible you make it perfectly straight. Large nostrils can be difficult to reduce without cutting the skin and leaving noticeable scars.

What are the risks?

Like any operation that is carried out under general anaesthetic, there is a small risk of chest infection, particularly among people who smoke. There is a small risk that infection could complicate the operation. You can minimise this risk by ensuring that you are free from cough, cold or sore throat at the time of your operation and, if you have any doubts, you should contact your surgeon.
Occasionally, the operation is complicated by heavy nose bleeding either shortly afterwards or after a week to 10 days which may require treatment in hospital.

It is quite common for there to be some difficulty with breathing through the nose during the first week after the operation which disappears as the swelling settles. Occasionally, though, the difficulty persists and can be permanent.
Sometimes (in about 10% of patients) the nose does not look right for the patient after all the swelling has settled. In these cases, it is usually possible for the surgeon to carry out a second operation to the residual problem of appearance but, not until all swelling has settled from the first operation. Most surgeons wait for a year for this to happen. Secondary surgery like this may involve additional expense.
What can you expect at the time of your operation?
Most British surgeons prefer to do this operation under general anaesthetic and you will need to be in hospital at least overnight. The operation is remarkably painless and it is unlikely that you will need anything other than mild painkillers afterwards. It is, however, uncomfortable because you will probably have dressings in each nostril for a day or two which prevent you from breathing through your nose. You will also have a firm splint over your nose to hold the bones in their correct position.

What you should do when you go home?

You can expect to have some minor bleeding from your nose for the first day or two after your operation and you should dab this away gently with gauze squares or a clean handkerchief. Keep your head up as much as possible and avoid having hot baths. Do not blow your nose and try your best not to sneeze through your nose. If you are going to sneeze, cough it out. Once the dressings have been removed from the nostrils, you can clear your nose by sniffing into the back of your throat if you wish. Unless you are advised otherwise, it is better to leave any crusts in your nostrils until you see your surgeon for removal of the splint 1-2 weeks after the operation.

Although there is no medical reason for you to stay away from work for more than a few days, you will probably feel more comfortable if you take two weeks off and go back when the bruising has gone.